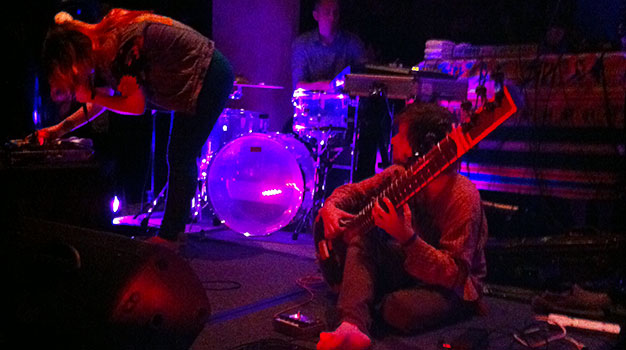 Musical ideals run deep for Sonnymoon. Originally conceived as a duo, producer Dane Orr and vocalist Anna Wise recently added drummer Joe Welch and multi-instrumentalist Tyler Randall to their permanent line-up, a change that has not only invigorated their live show but brought a new excitement to their entire creative process. With more control over specifics, the group is now able to expand and contract songs in the moment, instilling a jazz sensibility to their genre-breaking sound.

During our interview, all four members were brimming with excitement over the new realm of possibilities they’ve only just started to explore. After a brilliant return to Pagoda Lounge on the first night of Summer Fest, I sat down with Sonnymoon to speak on their jazz connections, how they all came together at the Berklee College of Music and what their plans are moving forward as a quartet.

Comparing your live show to the songs on record, it’s apparent you implement improvisation during your performances. Along with Anna’s vocal phrasing, there definitely seems to be a jazz sensibility to the group. How much of an undercurrent does jazz play in how you’ve approached music as Sonnymoon?

Dane Orr (producer / saxophone) : I think if you see it, then it’s there. Obviously, you see some form of jazz in our set, and that’s kind of the same way we approach it, because we don’t really think about it but we’ve experienced a lot of those recordings and we’ve enjoyed a lot of jazz. We still go to Sonnymoon as a separate thing [though]. We have lots of other influences in addition to jazz. The point is to forget it all, and I feel like jazz musicians are going for that same thing. It’s more based on what you think as the listener for us.

The group originally started out as a duo. How did the duo turn into a quartet?

Joe Welch (drums): I met Anna and Dane before school had even started, just sitting around the dorms. Dane had introduced himself to me, and he was an aspiring jazz saxophonist. He was deep into that, and as I got to meet everyone around Berklee, I started to really get into the jazz scene with the players around there and really get affected and influenced by the essences of that music, and I think that just sticks around with you as you go. It was the same with Anna. I met her in the basement of the dorms. Everyone was just jamming.

Dane: We knew each other long before. We were sort of playing music together the whole time.

What brought you four to the Berklee College of Music?

Joe: I definitely went to play the drums, and I wasn’t exclusively interested in jazz. I was really excited about Berklee because it seemed like the place to meet people who were not afraid to make new things and bring all types of music together. It was a very diverse school – very happening, very fast-paced and high level — so it was just the place I knew I had to be myself.

Dane: Like Joe said, I went there for saxophone, but I got through a year and a half of performance / jazz composition and then decided [to switch emphasis] because I had met Anna and we were all about doing a very utilitarian approach to music. We wanted to make [music] and be able to perform it with just the two of us. Because of that, I ended up switching to electronic production and design. I’m very glad that I did because you unfortunately can’t teach jazz but you can teach computer music and mixing.

Anna Wise (vocals): I went to Berklee to meet people, and I didn’t really know why I was there. I had failed out of a classical training school and a jazz training school — not failed but had decided to “discontinue my training.” [Laughs] Sometimes the decision was mutual. I was still under the impression that college was a good idea and that I needed a college degree to succeed in life, so my mother filled out my Berklee application and popped me on a plane to audition. I didn’t have anything better to do and I thought it would be a nice adventure, so I went. I know this is gonna sound whatever but I had a song in my heart and I didn’t know how to get it out. I needed to meet the right people because I didn’t want to be a solo artist, and I met those people.

Tyler Randall (sitar / guitar / bass / programming): My motivation for going to the Berklee College of Music in Boston was to get as far away from Cincinnati, Ohio as I could, and the East is where I decided to go. [Laughs] I wasn’t ready for the West. It seemed like a much different way of life than what I was used to, so I went out East.

Anna: Yeah, I agree with that. I wanted to get as far as I could from California, and that’s what I did.

What would you consider your philosophy or aesthetic?

Dane: We like to use the term “experimental” because that really describes our process. I think that we are open to whatever is gonna come from the four of us when we’re creating and playing. It sounds selfish but that’s how it has to be. It’s all about the four of us and it’s not about anything outside of [that], so we’re really gonna play to our strengths and try to interact as much as possible. We’re still learning how to do that.

Anna: When Dane and I first wrote Golden Age and the 2012 EP and the Sonnymoon LP, all we were doing was writing what we considered songs, the same way painters go to the canvas and paint what they think is a painting or someone goes to a piece of clay and makes what they think to be a sculpture. We [made] what we consider music, what the two of us — now the four of us —  consider music all together, our energies colliding and interacting to make what equals us from our lives thus far. It’s not like we’re trying to be weird [or] experimental. We just are.

Joe: I like it to be as organic as it can be.  I’m really excited because we all have such diverse influences but they all seem to complement one another really well. I feel like [with] our chemistry, things are brewing.

Anna: The four of us haven’t even reached our potential. Not even slightly.

Joe: There’s still a lot of ground to cover. We’re all young [and] we’re all heating up.

With the addition of Joe and Tyler, it sounds like the focus is now more on touring and the live process than it is about the recording process.

Dane: It was about [the recording process] for a long time and then we realized that was a short road and that the live road is infinite.

Tyler:  Now with our numbers, we’re able to take a sample and perform it, so we can interact with the rhythm. I can play the sample longer and Joe can fill in more or less. It happens all the time, especially in “Watersboiled.” That’s totally improvised. Every time it’s different. It can get more and more live and that’s what we’re going for, because when you made the record, it was a produced thing. Now we’re bringing it to life.

Joe: With me coming in and playing the drum parts that Dane wrote, it’s almost like re-creating a different version of the song. It’s funny how when you play with a group, the tunes that you play seem to evolve with you guys through time. We’re going crazy with that right now.

It sounds like the group has been energized by the addition of Joe and Tyler. With that said, where is Sonnymoon headed?

Dane: I think we’re continuing to just move forward. We really just want to keep playing as much as possible. New stuff will come as we play more together. Like I was saying before about playing to people’s strengths and weaknesses,  [we’re] just slowly letting it simmer up and working it, getting everything tighter.