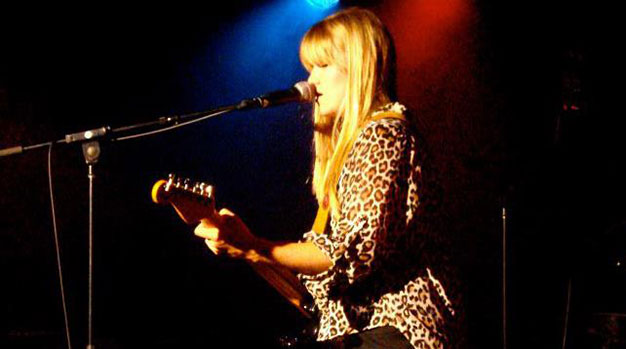 Growing up in Prunedale, a small town near Monterey just north of Salinas, Livia Slingerland was exposed to classic rock at an early age. At 13, she began learning guitar at the San Jose’s School of the Blues. Taught by John Garcia, a former John Lee Hooker band mate, her burgeoning skills led her to hone her skills at jams at Poor House Bistro.

“I remember every time I had a solo thrown my way, I’d just be relieved after the solo was done that I made it through it,” she recalls. She’s since grown to embrace the stage, shifting from guest guitarist now to band leader, complete with original compositions.

Two years back, she left tiny Prunedale for LA’s urban metropolis to attend USC’s Thornton School of Music. In the intimate program, she’s gone through rigorous ear training and songwriting courses, encountering a number of styles and eras that have helped her shift the band’s sound. Though initially known as a blues guitarist, she admits that her new material is shifting to more pop rock, a change she anticipated before heading down to USC.

A few days after she and her band mates enjoy Drum! Night – they’re excited to see Red Hot Chili Peppers drummer Chad Smith – Slingerland and company will open the YP Blues Stage Sunday, August 11 at noon. We talked to her about what initially drew her to the blues, outlined her rise on Summer Fest stages over the years and learned what she’s planning for the follow-up to her debut.

How did your group meet, and how much of a blues background does your band have?

We met because we were all admitted to the same class at USC. There’s only 25 people in our class, so we all are around each other a lot. I wouldn’t say the other band members are super into the blues. My keyboard player is really into Billy Joel and my bass player likes a lot of reggae stuff. I did a lot of blues in high school, so I kind of introduced that into our band settings.

As a band, I think we’re definitely shifting more toward a pop rock sound, but I kind of had that in mind before going to USC.

What drew you to the blues to begin with?

Since I’m a guitar player, I think I gravitate toward [the style] because of all the great blues guitarists that are out there. I see blues guitar playing as necessary to be able to play the other styles that I’ve been working in. I view it as a very good foundation for rock guitar playing and everything else.

My dad and I listened to Eric Clapton in his truck when we were driving around when I was little. I always just gravitated to that sound – Cream and stuff like that – and then it got into the blues rock area. I really like blues guitar because you can play what you feel. It’s got a lot of room for improvisation and doesn’t have to be the exact same thing every time.

You play from time to time with Kyle Rowland, another young blues talent in the region. What’s it like being a young person interested in the blues?

I personally haven’t really run into a lot of young people that are into playing the blues – there’s only a small handful really, and most of them are young guy guitar players. That was the differen’t thing about Kyle – he played harmonica. Kyle and I are good friends. When he’s around, he comes down to play sometimes. We just played at a jam at the Grand Dell [Saloon in Campbell] together. He’s actually going to play a few songs with us at the Fest.

I don’t really see a lot of people or meet a lot of people who are really into the blues around here. I remember when I was in high school, I didn’t have any friends that knew much about or liked the blues. I think they just didn’t like it because they didn’t really know anything about it or they thought it was old and not popular. It’s nice to know that people are still into the blues.

In a way, San Jose Jazz Summer Fest has been a location where you’ve been able to transition from special guest to solo artist. Walk me through that first appearance to your upcoming slot opening the YP Blues Stage Sunday.

[In 2010], JC brought me up to play two or three songs. That was cool because that was the biggest audience I had ever played to. That was also the first time I’d ever played at a festival. I think his set was later in the day, and there were a lot of people there. I was just really happy that entire weekend after performing because everyone seemed to respond well to my performance.

I played [the Fest again] last summer with a group of all female blues musicians billed as the Red Hot Mamas. That was cool because then I was playing an entire set at the Festival as opposed to two or three songs. This year, I’m really happy because I get to bring my band and have my own original music to showcase. I’m excited to show everybody from San Jose what I’ve been working on in Los Angeles.

You’re working on a follow up to your debut, Cherries and Candy. How is it coming along?

Right now, we’re in the developing stages of it, but I’m thinking [it will be a] three to five track EP with the newer songs I’ve been working on the last year or so with my band. It is pretty pop rock. One of the songs I’m excited about is called “Shouldn’t Bother.”

I’m still nailing down exactly which songs I want to include. A couple of songs don’t even have guitar solos, so I’m excited to see how people react to it. Everybody really likes the songs I played for them down here in LA. I’m hoping that the blues fans will respond to it well.

Livia Slingerland plays the YP Blues Stage Sunday, August 11 at 12pm. For more info in Livia Slingerland, connect with her on Facebook and Twitter or visit her site at ljslingerland.com