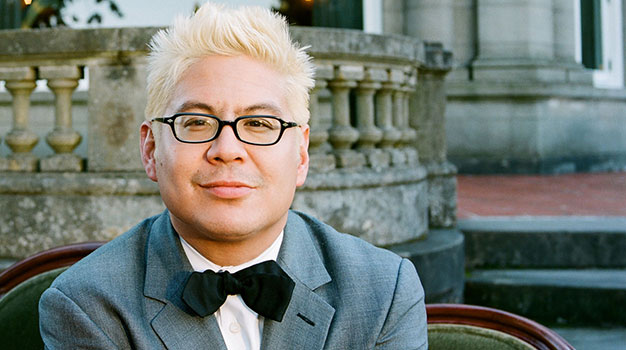 Pink Martini is an apt group to describe our time. Though their music can evoke an infectious nostalgia that touches upon 40’s cinema, classical music and the 1950’s Latin music explosion, their musical diversity is indicative of the global perspective that is the norm in our ultra-connected world.

Similarly, the group’s many cultural touchstones can providing glimpses into a number of cultures within a single set – perfect to accommodate our shortened attention spans. In doing so, they capture an old-fashioned, earnest sensibility in a contemporary way.

“I never wanted [the band] to be ironic,” Lauderdale declares, offering a defiant yet fresh outlook that runs in distinct opposition to an increasingly snarky world.  It shines through in their electric, fun-loving performances, cultivated from a philosophy that stars with their thoughtful, optimistic leader.

While we had Mr. Lauderdale on the phone, we revisited the beginnings of his creative partnership with singer China Forbes, inquired about their multi-cultural (and multi-generational) sound and asked what’s still left to accomplish for a band that’s already collaborated with most of the best symphonies in the world.

I understand that originally, you and China were the creative nucleus of the band. Is that still true?

After the start of the band in 1994, we actually had a different singer, but I always had China Forbes in mind. I called her and sort of tricked her into coming to Oregon.

How did you know that she sang? You went to school together but you didn’t study voice, right?

She and I would spend a lot of time together in the practice rooms in the middle of the night, singing crazy versions of “The Way We Were” and Puccini arias. She was also the cleaning aid down at Adams House Dining Hall [at Harvard, where Forbes and Lauderdale both attended college] where she’d sort of regale stories. She’d just have everybody in stitches for hours. There was always an element of entertainment from our college years that I thought she would be able to bring to the band, and it worked out perfectly.

[Originally] China and I were writing a lot of the songs and coming up with the various ideas. These days, it’s a bit different because it’s more almost variety show than I always hoped to have [with the band].

I think a lot of the band’s energy comes from the unusual collaborations that you do with Saori Yuki, The Von Trapps and Ari Shapiro. How did these come about?

The band has been around for 19 years and I’m always looking for new ways to entertain myself. I always thought it was interesting to work with friends, people who had never really written songs. It would make it fun and more about friendship and spending time together. [It was also a] great excuse to fly somebody into town for a couple weeks. I think it makes the material more interesting.
China and I have our own individual lives that we bring to the table with songwriting, but I always think that it’s not enough – [our ideas are] so broad that they need a constant new flux of ideas. I would say that China’s much more of a songwriter than I am. I’m the reluctant one who would be happy just playing Chopin for the rest of my life.

I never really expected to be doing music professionally at all. It never would’ve occurred to me that I ever would’ve been in a band, let alone running one. I really was sort of more on track to kind of become mayor of Portland, and I think it’s better that way. If I hadn’t been flexible, knowing what I know now, I don’t know that I ever would’ve started the band. It was just sort of about moving instinctually and being flexible enough to go with whatever was happening.

It depends on what mood I’m in. If my home life is settled, I love the traveling. This year, I’ve not had nearly enough time off, so I’ve been a bit exhausted and grumpy in terms of touring.

Then again, when I think about how lucky all of us are to have this almost preposterous, implausible sort of vehicle to be able run around and actually make a living – to play this kind of music with ten to twelve full time musicians – it just seems incredible. I think that we’ve been really lucky because, at least in this country, we’ve had NPR and we’ve had symphony orchestras. Both of those things really helped cement our career in the U.S. Otherwise, there would’ve been no way that we could’ve ever been able to travel, especially in the early years.

I think one of the most interesting things about your music is how it evokes different cultural memories, often at the same time. Did you set out to create a multi-cultural, multi-era sound?

The goal was actually really simple: [I asked] “What kind of band do I want to hear personally?” From the beginning, I’ve always made mixtapes of my favorite songs, sort of putting them next together. Similarly, I feel like that’s how I’ve approached Pink [Martini] these days. It really is sort of a big multi-cultural, multi-lingual, multi-style kind of project.

It kind of works out, especially because the attention span is so different than it was 50 years ago. In terms of the repertoire of the band, it actually keeps everything more interesting for a listener. The idea is to constantly seduce listeners and get them to keep on listening. I really think the diversity of sounds is great.

I’ve always thought your albums were really well paced. They’re sort of like a journey. That might be part of it.

Some of them are better paced than others. The first album was really great because it wasn’t trying or thinking about anything. There was nothing to lose, and I had my entire life to gather the songs. It becomes more difficult, especially [when you start to think] “I don’t want to mess up this great situation up for myself.”

I wish this [new] album were slightly giddier than it is. I just couldn’t get there because there’s a lot of heaviness in the world. It’s good. Hopefully, it lives up to the title [Get Happy]. At one point, I thought we should just call it “Get Happy, Damn It.” [Laughs[

The thing is – one thing about the band, I never wanted it to be ironic. I like the idea of just being very earnest about it in an old-fashioned sort of way. I think that so far, that comes through ,and it comes through because there are constantly different singers to listen to. I re-arranged the album when we were down in Los Angeles recently and did a different order, which actually makes the whole thing feel better.

What goals do you hope for the group in the future?

To keep working. [Laughs] To be able to squeeze a few more years out of our good fortune.

Before you become mayor.

Well, I think that’s a little unlikely. I’d have to write the tell-all book, then I’d have to take a huge pay cut and I’d have to work under fluorescent lighting, which alone is dissuasion enough. I’d love to [though] – who knows?