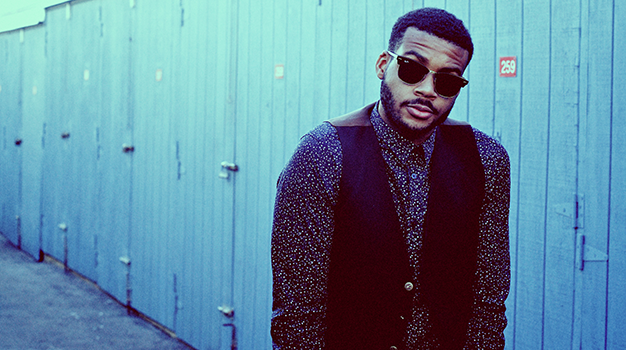 After a Winter Fest 2013 performance in José James’s band that found him making up for lost time on stage (more on that below), Kris Bowers steps forward to showcase material from his recent debut, Heroes + Misfits, at Summer Fest 2014 when he closes our Jazz Beyond Stage Fri Aug 8.

Thanks to technology, we asked Bowers a few questions via Skype while he was on tour with James in Finland. He let us know about how he became part of the fun (and comprehensive) “history of jazz piano” video, opened up about how he and his contemporaries connect through a shared musical vision void of boundaries, and outlined which jazz voices first caught his attention when the art form really started to catch his ear in high school.

I want to start with a moment I recall from your Winter Fest 2013 performance with José James. If I remember correctly, José said something during the set about you arriving last minute for the show, so he threw some pretty long solos at you. You held your own, but I remember him saying something along the lines of,  “He didn’t make it on time, so I’m making him make up for it during the show.” Does that night still ring a bell?

Yeah.  I don’t know what happened, but I had a string of missed flights for really dumb reasons — forgetting my passport, going to the wrong airport . . .  That time, I looked at the arrival time and thought it was the departure time, so I showed up at the airport three hours late.

In recent news, your music is now being featured as an in-flight selection on certain American Airlines flights. Did you ever think you’d be the type of artist someone could listen to mid-flight?

Man, not at all! That was so funny when a friend sent me that. [Laughs]

I don’t think this is related at all, but I fly American a lot, and they have really cheesy piano versions of pop songs before take-off and landing. It’s like some Carrie Underwood song, but only piano. It’s just really dry and cheesy. At one point, I had flown a bunch of flights on American and I tweeted at them saying how cheesy their music was.  They started following me on Twitter, so it was very funny that [they now feature my music since] I had tweeted to them.

It’s probably some 17 year old kid in their offices that’s an intern tweeting back to me, but it’s just funny that they happen to have my music now after I complained about their music. [Laughs]

Your debut album, Heroes + Misfits, explores the nuances, struggles and hallmarks of the Millenial generation. I’d like to talk a bit about your contemporaries — I think of people like your bandmates José James and Takuya Kuroda in addition to other future-forward artists like Thundercat – and your shared sensibility. There seems to be a musical kinship and a serious camaraderie among many of you. What unites all of you?

I think it’s just that we all feel the same way about music in general. We’re all very open-minded and honest about the music that we love. Whenever I’m on tour with these guys, the thing we talk about is what other music we’re into and how important it is to not be narrow-minded about how to define genres.

Two pieces in particular I’ve seen with this generation or artists with a jazz sensibility is their willingness to include elements of hip-hop and electronic dance music in their approach. Does that just come from growing up with the music? It seems like you and some of your contemporaries realy recognize and respect those art forms since you pull from those traditions without it seeming forced.

I think that’s exactly it. Like you said, I love that music just as much as I love traditional jazz, or whatever you want to call it. I think that comes across in my music and in these other artists that you’re naming.

I think you can hear it any time somebody tries to force it. I know jazz guys who play pop songs just to be cool or to appeal to a younger audience but not because they actually have a love or respect for that music. I think it’s kind of obvious that they’re doing that just to get a couple more YouTube views.

You didn’t really grow a love and appreciation of jazz until you were in high school, correct?

Yeah. I started playing it in middle school, but I was doing it just because that’s what I was studying. It wasn’t until I got into high school that I actually started a jazz album collection and began studying jazz players.

Who were some of those first artists that grabbed your attention and informed how you ended up pursuing your musical career?

Later in high school, I really loved Wynton Marsalis’s band in the 80’s. Branford [Marsalis], Kenny Garrett, and Kenny Kirkland . . . All that kind of stuff. Those were definitely some of the people who got me into it. And Herbie – Herbie, obviously. [Laughs]

Pulling from other areas as well, who are some of those key people who guide where you want to go musically, be they in hip-hop, R&B, pop, whatever.

How did you get involved with creating the Collective Cadenza video “The History of Jazz Piano”? Did they reach out to you? Did you reach out to them?

One of the main guys that does that, the bass player in the video — Michael Thurber — is a friend of mine. We went to school together, so we’ve always been in touch about other things and played together. I’ve played shows and recording sessions with him. He had the idea of doing a history of jazz piano video, so he hit me up.

It’s funny because I put together the list with [Thurber]. We got rid of some names for the sake of time, and then I figured out what songs I wanted to play from each of those piano players. It was maybe halfway, or even three quarters of the way, through making the list that I realized I was going to have to learn all of this music. [Laughs]

I’d say honestly, there was maybe a quarter of it that I didn’t really know that I had to really sit down and learn. Most of it I had either played before or it was stuff that I knew well enough that it would just take me a second to figure out.

In addition to your solo output, you’ve done work with film scoring and composition. What is it that you enjoy about scoring, and how does that process fulfill you artistically in a way your solo work doesn’t totally fulfill?

The thing that drew me to film scoring is the fact that you’re part of telling a story. You have to translate emotion into music. That’s the best part to me: trying to figure out how to convey a certain idea or emotion through sound.

I play improvised music, and on some nights, it’s gonna be great; on other nights, it’s not gonna be so great. It’s kind of nice to be able to spend a lot of time creating something and then sit back and watch the marriage of what you’re creating with picture and a story. It’s just a totally different and rewarding process for me.

Kris Bowers appears on the Jazz Beyond Stage 10pm Fri Aug 8 after an opening performance by GIZMO. For more information on Bowers, follow him on Twitter, like his artist page on Facebook, or visit krisbowersmusic.com.