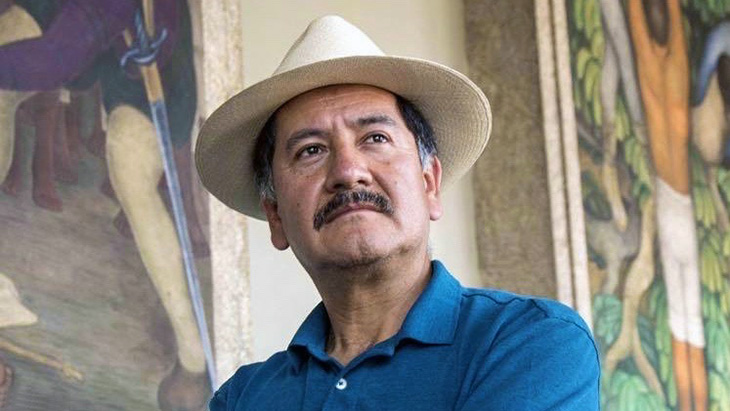 Always celebratory and frequently familial, the Salsa Stage is one of San Jose Jazz Summer Fest’s musical and social pillars. For 2018, the stage’s bookings are in the good hands—and keen ears—of Betto Arcos.

Qualifications-wise, Arcos is top shelf: A radio journalist, DJ, educator and concert producer, the Los Angeles resident has been heard on NPR and PRI. He has taught art, culture and broadcast journalism at Loyola Marymount University and is currently the producer and host of the podcast The Cosmic Barrio.

Public radio devotees will be familiar with Arcos’ name and voice from his past and present work on NPR’s Weekend All Things Considered and PRI’s The World and as the host and producer of Pacifica Radio’s Global Village from 1997-2015. He also contributed to the anthology The Tide Was Always High: The Music of Latin America in Los Angeles (University of California Press, 2017).

Introduced to SJZ Artistic & Festival Director Bruce Labadie at a California Presenters conference in Monterey back in 2007, Arcos had known of Summer Fest by reputation. During 2018 Winter Fest, Labadie gave a tour of the many sites for Summer Fest bandstands.

Arcos was impressed, if a little spent. “It took us two hours to walk around and see where all the stages would be. It’s pretty massive,” Arcos says, by phone from his home office in Los Angeles.

“For this festival Bruce asked me to focus on the Salsa Stage,” he continues. “In one or two emails, he said to me clearly, ‘Arcos, we have a very, very strong dancing crowd. And we need to make sure that we have bands that are going to get this crowd dancing!’ So he threw down the gauntlet.”

Arcos had booked some shows in Los Angeles where the crowd listened to the band more than it danced, so he knew what to avoid. Whether it’s the traditional sounds of Changüí Majadero, the modern timba styling of Rumbankete or the stage’s titular salsa courtesy of Orquesta Son Mayor, Arcos has 2018 Summer Fest patrons covered.

“The common denominator here is dance music.” he reiterates. “But (the bands) are so different and very representative of what’s happening in L.A.”

“I know the Bay Area has a very strong and engaged Salsa scene,” he emphasizes. “I’m looking forward to meeting folks from the community and get to know and learn more about them.””

When asked to compare the Latin Jazz scenes in southern and northern California, Arcos points to the Southland’s bigger population and greater scope of professional opportunities. “A lot of musicians come to work in the studios, and I think that makes a difference,” he says. “You have such a wide array of musicians coming from Latin America because they can work in film and television doing recording sessions.

“So I think it got big because of the studios,” he adds, painting the scenario of musicians who have steady session work and can also play in a band or three covering various genres. And there are enough creatively open-minded working musicians that sub-genres can be thrive, too

“But Latin American music has been here since the beginning,” he notes, with a chuckle. “The Padres brought all that Spanish music.”

Though he’s spent his adult life in either Colorado or Los Angeles, Arcos has an affinity for the Bay Area. ” I lived in Palo Alto for a year when I was 15,” the Xalapa, Mexico native recalls. “I lived with an American family in Palo Alto and attended Wilbur Junior High School.

“That was just the one year. But one year, as a teenager, it makes an impact, you know? The family would take us places, so we’d go to San Jose, we’d go to San Francisco,” he remembers, with a fondness in his voice. “I’ve been connected to the Bay Area since 1977—long before the whole Silicon Valley explosion.” That connection has now extended to the next generation, too: “My son now goes to Santa Clara University, so we go up to visit all of the time.

Already on the docket for a future trip: 2018 Summer Fest. “I’m bringing my dancing shoes! The best way to know people who like to dance salsa is dancing along side them,” he enthuses. “I also love dancing, so after I introduce each band, I’ll be on the dancing floor, saying hi to the community.

“I just love this opportunity to share my love for this music with such a great festival,” he concludes. “And to do this at a place that I have been connected to for so long just feels so natural.”

Betto on the Bands

“None of these bands have played at Summer Fest before,” says Betto Arcos, who was responsible for booking this year’s Salsa Stage. “So it’ll be a first for all of them.” The Southern California resident and Latin jazz music expert and champion looks at four of the Salsa Stage groups he booked for 2018 Summer Fest.

“Changüí is a style of music developed at about the same time as son, which goes back about 100 years,” he explains. “Think of it as two roads: One road is son, and the road leads to salsa. And changüí is the other road that just stays that way. But because they were parallel styles, and they have this very strong African beat to it, the music is infectious”

As far as both repertoire and style go, Changüí Majadero’s songbook will sound familiar to Salsa Fest crowds. “It’s a band that’s rooted in tradition. But at the same time, it’s a band that can also play tunes that are very familiar—songs that maybe they heard when the Buena Vista Social Club first came out” back in 1997.

“Talk about opposites,” Arcos exclaims. “Whereas Changüí Majedero plays this kind of vintage Cuban dance music from a hundred years ago, Rumbankete does this awesome mix of 21st Century dance music.

“Some people, when they hear that, they think, ‘Oh, that’s salsa.’ But it’s not,” he goes on to point out. “They play something called timba, which emerged in Cuba in the late ’80s and early ’90s. It was the result of this kind of coming together of funk and jazz and improvisation and musical styles like rumba.

“The two main singers and composers of Rumbankete came from Havana. They were right at the heart of it when this explosion happened in Cuba,” he says.

The pair emigrated to Los Angeles and connected with eight other likeminded locally based musicians. “Once they get playing, oh my God! It’s hard to stop dancing,” Arcos relays.

“Then we have another L.A. kind of phenomenon, which is Boogaloo Assassins,” he says. “Boogaloo was born in New York in the early 1960’s. It’s this kind of alchemy with Cuban rhythms and R&B coming together one and creating this beautiful, very danceable, funky style.”

Boogaloo Assassins are a next generation band that writes its own material. “But they also those classics from the 1960’s,” he reveals. “I can already see the (Summer Fest) audience that’s going to listen and dance to this music.”

At one point they’re going to say, “”Wait a minute! This sounds familiar,'” he predicts.

“They’ve been around for thirty years,” Arcos reports. “They probably the oldest, strongest and most active salsa band in Los Angeles. It’s another ten-piece band, and they are just a blistering hot.

“They do a lot of original pieces, but they also do some covers. Their specialty is salsa, and they do a great a straight-ahead version of it,” he concludes.