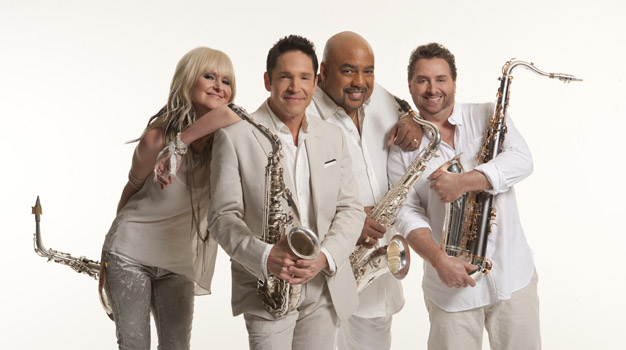 Dave Koz, Mindi Abair, Gerald Albright and Richard Elliot – these four saxophonists have each had extraordinary careers, their resumes impressively gilded with gold and platinum-selling CD’s and numerous awards.

An ingenious concept then for all four stars to come together on Dave Koz and Friends: Summer Horns, which debuted at #1 on Billboard’s Contemporary Jazz Chart and has become the feel-good smooth jazz release of the season.

For its identity, the Summer Horns project looks to classic pop hits from the 60’s and 70’s that derived a significant part of their sound from exquisitely constructed, multi-layered horn lines. If you listened to radio at that time, you couldn’t miss songs like Tower of Power’s “So Very Hard to Go,” Sly and the Family Stone’s “Hot Fun in the Summertime” and Chicago’s “24 or 6 to 4,” radio anthems where brass instrumentation was an integral part of the production.

This is pop songwriting at its ultimate: sophisticated yet immediately and quintessentially listenable, full of hooks that grab and don’t let go.

“I’ve always been fascinated with that sound. The first album I ever bought was Tower of Power’s Back To Oakland,” notes Dave Koz, the unstoppable force behind the Summer Horns collective. (Even more fitting then that Richard Elliot, a former member of Tower of Power, should be part of the Summer Horns’ four-saxophone offense.)

Koz, one of the leading lights of the smooth jazz world, has earned eight Grammy® nominations since releasing his eponymous debut in 1990 after years playing and touring as a sideman with Jeff Lorber and Richard Marx. Highlights of his recording career include Lucky Man (1993), The Dance (1999) and Saxophonic (2003). At the Movies (2007), produced by Phil Ramone, topped Billboard’s Contemporary Jazz Chart for 12 weeks and received a Grammy® nomination for Best Pop Instrumental Album.

As further evidence of his stature in the industry, as well as his growing celebrity, Koz received a Star on the Hollywood Walk of Fame in 2009.

Hello Tomorrow, Koz’s first release for Concord Records, similarly reached #1 and was named “Best Smooth Jazz Album” by iTunes in 2010. The New York Post said in its review, “Koz . . . possesses a sterling, pure-tone instrumental technique that is the backbone of this record.”

Koz is also known for his Jazz Cruises, “Dave Koz and Friends at Sea.” These week-long excursions have sailed the oceans to international destinations since 2005, encouraging camaraderie amongst guests and musicians, who both have the opportunity to hang out and get to know one another in an informal, convivial atmosphere.

It’s this same spirit that brings Koz to the Summer Horns project, billed as Dave Koz and Friends (and what friends they are). Mindi Abair is American Idol’s in-house resident sax player. She’s toured with Aerosmith for the past two years and has played with everyone from Bruce Springsteen to Paul Schaffer on the Late Show with David Letterman. She has hosted her own radio program, “Chill with Mindi Abair,” for eight years and is currently President of the Los Angeles Chapter of NARAS (the National Academy of Recording Arts and Sciences, producers of the Grammy® Awards).

Gerald Albright is a multi-instrumentalist who has sold over a million CD’s and recorded and toured with Patrice Rushen, Anita Baker, Ray Parker, Jr., Quincy Jones, Whitney Houston, Phil Collins and others. He’s also cultivated a parallel career on TV, having appeared on Melrose Place and A Different World. Albright was one of ten saxophonists featured at the inauguration of President Clinton and subsequently went on to perform at several private events for the former President.

Richard Elliot was born in Scotland and has worked with artists from Natalie Cole to the Pointer Sisters. He was a member of Tower of Power from 1982-1987, touring frequently in support of bands including Huey Lewis and the News. He released his first solo CD in 1986 and has recorded numerous best-selling CD’s and performed worldwide as part of “Guitars and Saxes” and “Jazz Attack.”

Summer Horns will feature an all-star saxophone quartet – not to mention Dave Koz’s world-class band – playing some of the finest pop songs ever written. If you’re a smooth jazz fan, don’t miss this chance to see a number of sax heavyweights share the Summer Fest Main Stage.

Can’t wait to see this powerhouse smooth jazz performance? Let us know by leaving a comment below or by sharing your thoughts via social media and including our Summer Fest hashtag — #SJJAZZFEST