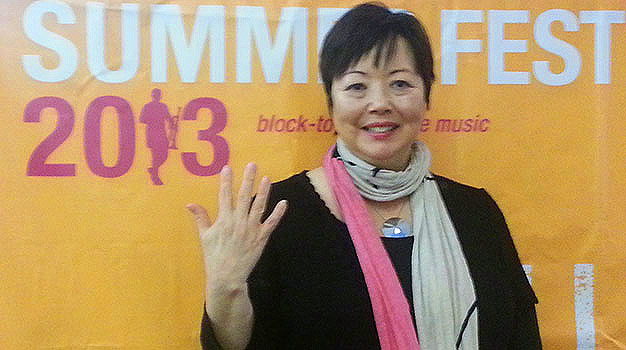 Earlier in her life, Kathryn Diamond, who joined our Board of Directors in 2009, was a founding member and regular on-air broadcaster at KCBX, a not-for-profit jazz radio station in San Luis Obispo. A person with a passionate life-long commitment to jazz, Diamond is currently on the Board’s Education Committee, where she works to support and promote the organization’s many jazz education programs for San Jose’s youth.

“Jazz is both one of America’s great inventions and an essential part of who we, as a people, are,” says Kathryn. “It’s vital that we make it accessible to today’s young people. That’s how we keep it alive and thriving.”

Her extensive jazz  knowledge came in quite handy when she needed to eleborate on her Fest Five. Below, she highlights the acts she’s most excited to see, adding some background on the artists in her own words.

“Pink Martini’s music is a cocktail mashup of classical, jazz and international pop – pure fun! I saw them perform with the San Francisco Symphony two yearrs ago to raving crowds and multiple standing ovations. I can’t wait to see them at Summer Fest.”

“Clifford Brown was an amazing trumpeter that died in an auto accident when he was just 25 years old. He left behind a remarkable four year legacy of original music and recordings. Max Roach, a composer, educator and civil rights leader – not to mention one of the most important drummers in jazz history – got together with Clifford Brown from 1954 to 1956 to form their hard bop quintet.

“I was mesmerized by Max Roach solos during the 80’s at the Blue Note in NYC and Keystone Corner in San Francisco. Trumpeter Scotty Barnhart, a two-time Grammy winner and 20 year veteran of the Count Basie Orchestra, brings the music of Clifford Brown and Max Roach to life in 2013 with the help of ace drummer Clayton Cameron, special guest Grant Stewart on tenor saxophone and Jeff Chambers, one of my favorite bassists. This group will pay tribute to one of the most influential bands in the history of modern jazz.”

“Son Arturo continues in the tradition of father Chico O Farrill and his Afro Cuban Jazz Orchestra. Arturo is a pianist and composer who formerly worked with Carla Bley and went on to form the Afro Latin Jazz Orchestra, which played at Lincoln Center.

“What you may not know is that he is a very talented solo pianist. Check out his first solo piano CD produced last year, the Noguchi Sessions. The selections range from free improvisation (“The Sun at Midnight”) to very personal compositions (“In Whom”, written for his son; “Mi Vida”, written to commemorate the wedding anniversary of his Aunt and Uncle).

“Half of the pieces are written by Arturo himself, with the remainder an eclectic range that covers sounds as varied as Americana (“O’Susanna”) and traditional ballads (“Oh Danny Boy”). He even includes Charles Mingus’ tribute to Jelly Roll Morton (“Jelly Roll”).

“Surprisingly, O’Farrill, born to a Cuban father and Mexican mother, draws his inspiration on this album from Japanese born artist , Isamu Noguchi. The solo sessions were recorded at the Noguchi Museum in Long Island City, NY. Maybe he will surprise us on stage with one of his intimate, incredible solos during Summer Fest?”

“Tammy Hall is a soulful jazz pianist. As Andrew Gilbert of the San Francisco Examiner writes, ‘What stands out most is her compelling lyricism. With an uncluttered, telegraphic style marked by her classical training and deep roots in the Baptist church, Hall gracefully combines elegance and grit. ‘

“I heard Tammy in great form perform two years ago perform with vocalist Kim Nalley in a moving tribute to Ella Fitzgerald. Also appearing with Tammy is local hero Kristen Storm on sax.”

It’s Cookin’
The Cookers – A dream team of hard bop (and we don’t have to go to Japan or Europe to hear them!)

“It’s impossible to foresee how any ensemble will gel until the first notes are played, but The Cookers had an inherent advantage in that these legendary jazz men had all proven themselves integral components in great bands of the past. Harper was a member of groups led by Lee Morgan and Max Roach and served a two-year stint with Art Blakey’s Jazz Messengers; trumpeter Eddie Henderson and drummer Billy Hart were both part of Herbie Hancock’s electric Mwandishi ensemble; pianist George Cables played alongside Dexter Gordon and Art Pepper; and bassist Cecil McBee anchored Charles Lloyd’s famed 1960s quartet with Keith Jarrett and Jack DeJohnette.

“This exciting all-star band summons up an aggressive mid ’60s spirit with a potent collection of expansive post-bop originals marked by all the requisite killer instincts and pyrotechnic playing expected of some of the heaviest hitters on the scene today. Don’t miss the opportunity to witness history in the making by experiencing this group live. For a preview, listen to a full 25 minute Cookers jazz session via NPR.”

“Do you like to really hear and understand each word to your favorite song? Stacey’s voice is crisp and straight forward. Shades of Nat King Cole, Blossom Dearie and Karrin Allison are all apparent.

“‘The Changing Lights, Staecy’s latest production, will showcase her love of Brazilian music. It includes Bossa Nova classics such as ‘One Note Samba’ and ‘How Insensitive’ as well as a number of originals.”