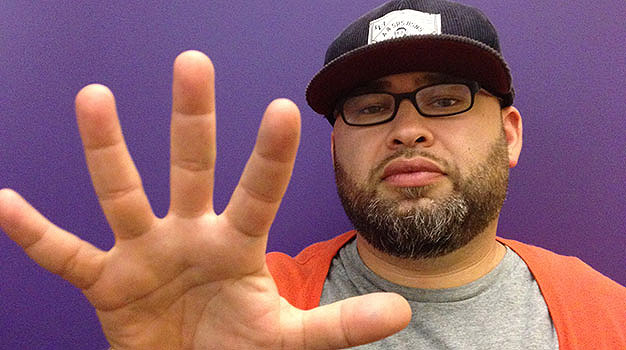 Tommy Aguilar has long been a force on the local music scene. With his production company and taste-making collective Universal Grammar, he continually brings quality, forward-thinking music to the intimate, deep red confines of the Pagoda, which will also serve as the home of this year’s RBC Jazz Beyond Stage.

This year, he helped us curate our jazz beyond stage programming, which has been expanded to three days. He’s also been instrumental in helping us spearhead our recent Jazz Beyond monthly series, which happens every second Saturday of the month. This new series looks to showcase artists that are taking jazz in exciting, innovative new directions.

Aguilar’s Fest Five, in his own words:

“For me, Dr. Lonnie Smith represents one of those jazz artists that have been used and sampled by many hip hop artists. Hip hop, a genre that is dear to my heart and soul, brought me into jazz. I think he’s really representative of that lineage. Not to mention he’s a pretty badass player. I’m excited to see him in the flesh, not just as a name in a sample credit and then buying that record.”

“I have to represent the Latin heritage in my veins. I’m very intrigued by Yosvany Terry and his smooth, soulful Afro-Latin sound. I just think he’s clean. Dafnis Prieto just came to my attention not too long ago. I was sold by their three minute EPK. Interested in seeing them for sure. You’re hard pressed to find a similar act on the bill.”

“The new album’s been on repeat. It’s something you can just listen to front to back.”

Miles Bonny and B. Lewis

“B. Lewis is an artist from San Jose, so I think it was my duty to help make his appearance happen. The fact that he’s on the line-up for Summer Fest is a groundbreaking thing in my opinion, because he’s an electronic based artist who rocks on a laptop and a MIDI controller. Traditionalists may say, ‘that is no musician up there on stage.’ I beg to differ.

“I’ve never had the opportunity to book Miles Bonny, so Summer Fest afforded this to happen —  it’s a special, one-time thing. I don’t know if they’ve ever been on stage together outside of South By Southwest a few years back. Maybe they have more collaborations up their sleeve when they link up again once Miles Bonny gets off the plane, but this might be a one-time thing only meant to be seen at Summer Fest 2013. If you listen to the project that they did [2012’s Egg Black EP], it seems like it’s a great partnership. Let’s see what it looks like live.”

“Lyrics Born is a true artist. He transcends musically. He can align himself with the funk heads and the underground hip-hop heads. He’s had some club/dance joints for the DJ’s. He’s an amazing freestyle emcee. He writes great songs. He’s curated a label that, at the time, was one of the best indie labels going. I think he’s influenced a good portion of hip hop on the West Coast.

“The interesting thing about this James Brown tribute rolling out is that I see it as a no-brainer. I don’t see him not doing justice. No one can mimic James Brown or any legendary artist for that matter, but I think Lyrics Born can get close because he’s a great performer, as was James Brown. Lyrics Born commands his audience. In terms of a Master of Ceremonies, Lyrics Born – that’s him to a T.”