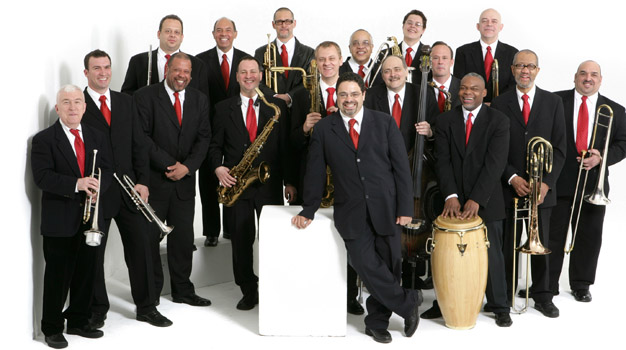 To fully understand the identity & music of Arturo O’Farrill is to understand the story of America: a coming together of many cultures, producing a unique & altogether fascinating result. It is a product that is in some ways wholly contemporary, but yet draws upon decades – if not centuries – of tradition, all of which are expressed on many levels, whether in the depths of yearning for some long-ago past or in the excitement of a future yet to come.

Arturo O’Farrill inherited a legacy already indelibly characterized by the American immigrant experience. His father, the Grammy-nominated bandleader Chico O’Farrill, was born in Cuba to an Irish father & German mother, but he made his way & ultimately his reputation in New York City, working with Benny Goodman, Stan Kenton, and later Count Basie, Machito and Dizzy Gillespie. Chico then went on to found his eponymous Big Band, which established residency at NYC’s iconic Birdland nightclub.

In the context of post World War II America, the emphasis on isolationism that dominated the landscape before the war was gradually replaced with a broader outlook and openness toward other cultures. Latin American music increased in popularity during this time, as bandleaders including Desi Arnaz & Xavier Cugat became well-known & respected national figures. Jazz artists – most famously Stan Getz – felt and embraced these influences too, realizing huge commercial & critical success as they married Latin and jazz styles.

This was the potent & richly fertile environment into which Chico O’Farrill’s son, pianist Arturo O’Farrill, came of age.

Educated at the Manhattan School of Music, Brooklyn College Conservatory and the Aaron Copland School of Music at Queen’s College, Arturo established himself from 1979-1983 playing alongside the influential composer, bandleader and artist Carla Bley (herself a fascinating, creative force of nature in her own right). Arturo’s career as a solo performer saw him working with Dizzy Gillespie, Steve Turre, Freddy Cole, The Fort Apache Band, Lester Bowie, Wynton Marsalis and Harry Belafonte, and in 1995, he assumed leadership of his father Chico’s Big Band.

From there, his reputation continued to grow as he founded the Afro Latin Jazz Orchestra (ALJO), based at New York’s landmark Jazz at Lincoln Center, in 2002. The project was widely critically acclaimed, and Arturo’s debut album with the Orchestra, Una Noche Inolvidable, earned a GRAMMY® Award nomination in 2006. The Orchestra’s second album, Song for Chico, earned a GRAMMY® Award for Best Latin Jazz Album in 2009, and their third and newest album, 40 Acres and a Burro, was nominated for a GRAMMY® Award for Best Large Jazz Ensemble Album.

In 2007, O’Farrill founded the Afro Latin Jazz Alliance, as a non-profit “dedicated t the performance, education and preservation of Afro Latin jazz.” In this role, he serves as an ambassador, introducing new audiences to the music and also receiving numerous commissions, ensuring that Afro Latin Jazz will continue to be a dynamic musical force for this generation and many more to come. He’s also found opportunities as a composer for film, including recent movies Hollywoodland and Salud.

While O’Farrill is very much a proud steward of his musical heritage, he strides boldly toward the horizon and beyond with a confident exuberance embodied in every note he plays. To listen to his albums (he’s recorded nine as leader and appeared on many more) is to feel a vibrant and infectious energy attuned to mood and nuance and able to reach out to listeners from all walks of life. This ability to connect has taken the Afro Latin Jazz Orchestra to concert halls, including the Kennedy Center, Boston Symphony, Newport Jazz Festival and international cities such as Yokohama, Japan and Athens, Greece.

A world-class pianist and a powerful, original creative voice, we are delighted to welcome Arturo and the Afro Latin Jazz Orchestra to San Jose Jazz Summer Fest.

Will you be watching Arturo O’Farrill and the Afro Latin Jazz Orchestra at Summer Fest? Let us know by leaving a comment below or by sharing your thoughts on Facebook, Twitter or Instagram using Fest hash tag #sjjazzfest.