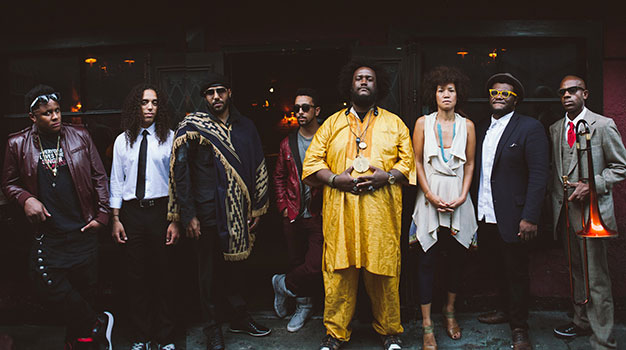 Imagine locking yourself in a room with the friends you grew up with for 16 hours a day, every day, over the course of an entire month so each of you can contribute to one another’s work.

Jazz saxophonist, composer, producer, and bandleader Kamasi Washington did just that in December 2011, when he and a number of his close musician friends cleared their schedules to focus solely on creating and capturing their own music rather than touring in support of other artists. The collective ended up producing 190 songs, 45  of which belonged to Washington. This batch laid the groundwork for what would become The Epic, his first solo album on the Brainfeeder label.

While Washington is known for his work with the likes of Chaka Khan, Stanley Clarke, Snoop Dogg, Flying Lotus and most recently Kendrick Lamar, it’s his recent debut as bandleader that really highlights who he is as a musician. The three-album set has been touted as one of 2015’s best, praised for its appeal to even those outside jazz’s small circle.

Washington appears at San Jose Jazz Summer Fest twice on Sunday, August 9. He opens the Kaiser Permanente Main Stage at 12pm with the Next Step, then closes the California Theatre Stage at 7pm with the West Coast Get Down, a loose collective of young musicians who have played together for years.

While sorting through his full collection of songs from the month-long studio session, Washington whittled that first group down to 17 songs. He says that he was so immersed in the music that he began having a recurring dream, sharing that “The music crept into my subconscious. It was almost like a movie.”

He became obsessed with the way the dream related to his music, and would go to sleep replaying the music to force the dream. Upon waking, he would immediately start writing and eventually developed a story. The 17 songs on The Epic are his way of sharing that story.

While many are intrigued by the length of his brazen 172-minute masterpiece, he counters by pointing out that each song played a part in telling that story. Had he left anything out, the music would go into an abyss and not authentically capture the full narrative.

Though he’s spent the better part of his career bolstering the work of others, he was really able to stretch himself on The Epic. “It’s like my sister when she paints,” he says. “People can’t see what she’s making when she starts. With my music, it’s like, ‘Let me get there [to] see how amazing it’s going to be.’ When you’re done, it’s very fulfilling to get that out. It’s a release.”

Washington’s journey to this point started in a community close to his heart, Leimert Park. A piece of “Leimert,” as it’s often called, can be seen in the mural behind Washington on the cover of his album – his way paying homage. It’s the neighborhood he grew up in and the locale known as the Los Angeles home of African American culture, music, and art.

Washington was encouraged at a young age to explore music. His father collected instruments and books, and Washington was just three years old when he got his first drum set. Influenced by his family and environment, his perspective grew. “It opened my mind to possibilities. I was only limited by what I was willing to do,” he recalls.

However, it wasn’t until a cousin gave him a mixtape of Art Blakey and Lee Morgan that he truly became curious about jazz. He remembers being blown away by the bravado of the music. He learned to play the drums, piano, and clarinet, but one evening at home discovered he could also play the saxophone after playing his favorite song at the time, Wayne Shorter’s “Sleeping Dancer Sleep On.” He was enamored. From that point forward, Washington dedicated himself to music.

Washington’s music is also deeply informed by the personal relationships he’s developed with his band mates, most of whom he’s known for years. Known collectively as the West Coast Get Down, this group of seven Los Angeles musicians are highly sought after individually. Together they create innovative music that transcends the confines of any specific genre.

He remembers how, as kids, this group would play until the wee hours of the morning in his backyard. He laughs and reminisces how his father would scold them that it was too late. “He would say, ‘you better stop playing before the cops come and break your instruments!’” he laughs.

Fast-forward to the recording sessions of December 2011 and Washington reveals that their history provided a level of connection that, near the end of their marathon sessions, created such an intimacy among the group that words were often unnecessary to communicate.

It’s this level of rapport that created a pathway for much of the work Washington has done with various jazz and R&B titans. When one of Washington’s crew is in a situation where they need the talent of another, they call on each other.

It was childhood friend and hip-hop producer Terrace Martin who brought Washington in to work on Kendrick Lamar’s celebrated album, To Pimp a Butterfly. Reflecting on those recording sessions, Washington says working with Lamar was something special. He was struck by how lush the music was and how Lamar did not hold back in making the music layered, bold, and dynamic both lyrically and musically.

He believes Lamar’s impact will continue to be far-reaching. “The album opens people’s minds and when that happens, who knows what it will lead to. That’s the beauty of music,” he adds.

Unlike performers who are eager to acquiesce to trends of the moment, Washington is not a stranger to going his own way,” he says “I’ve never liked the notion of doing what everyone else does. When people go right, I go left.”

This is obvious not just in the way he approached his album, but also in his personal style. After he began doing gigs, he never really felt comfortable in the glossy suit and tie get up. When he met a Senegalese tailor known as Bass in Inglewood, California, he was drawn to the patterns in the fabrics he saw. Bass asked if Washington wanted a shirt made, to which Washington responded yes.

He looks back on the encounter and says, “I liked it – it felt comfortable and just looked real cool.” Bass turned Washington onto other African tailors in the Los Angeles area, which began Washington’s affinity for bold prints and textures to match the music he was delivering. He adds, “It feels good to promote African culture too.”

Washington just began his months-long tour for The Epic and looks forward to providing audiences with something fresh that they can draw their own meaning from. He hopes listeners will be inspired by what they hear in the same way his jazz idols first sparked his curiosity.

“People need what we’re doing,” he says. “[They] need that healing. Music is more than entertainment.”

Kamasi Washington performs with the Next Step Sun Aug 9 at 12pm on the Kaiser Permanente Main Stage, then at 7pm on the California Theatre Stage with the West Coast Get Down. For more information on Kamasi Washington, please visit kamasiwashington.com.