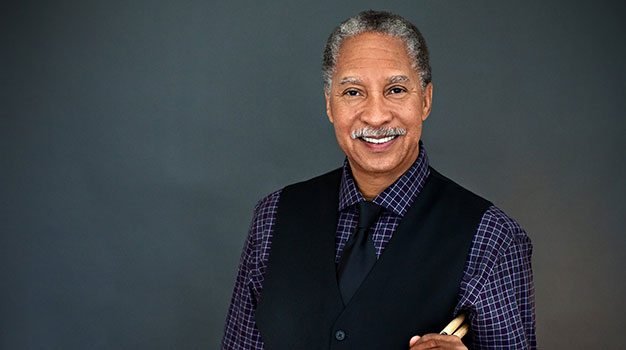 A legendary drummer and founding member of the 1960s funk group The Meters, Zigaboo Modeliste is considered one of the most creative and critically acclaimed drummers in music.

Studied by aspiring drummers, beloved by funk and rock devotees alike, and revered by musicians the world over, Modeliste has written over 400 songs individually and as part of The Meters, with his music found across 36 national and international albums. While some music lovers may know his famous syncopated grooves from The Meters backing such classics as Patti LaBelle’s “Lady Marmalade,” Lee Dorsey’s “Yes We Can,” Dr. John’s “Right Place Wrong Time,” or the Crescent City band’s own hits, fans of more contemporary music not may not know that they do, in fact, know Modeliste’s grooves quite well.

Modeliste’s former band is one of the most sampled acts in music history. One of their biggest songs, “Cissy Strut” has been sampled in over 50 songs alone, including The Jackson 5’s megahit “ABC.” Countless drum breaks created by Modeliste can be identified in samples used by hip-hop and R&B artists such as NWA, Musiq, Ice Cube, Salt-N-Pepa, Cypress Hill, EPMD, Digable Planets, Amerie, A Tribe Called Quest, Naughty by Nature and even Fatboy Slim. This year’s fest goers will likely recognize many of Modeliste’s breaks and the songs those breaks spawned.

Regarded as one of the innovators of funk and credited with creating what’s known among drummers as a “second-line groove,” Modeliste has been nicknamed “Godfather of Groove.” In response, he eagerly admits that he learned how to play grooves from musicians in the streets of his native New Orleans. He explains that he was inspired by the music he experienced at Mardi Gras celebrations and funeral processions. He sought to combine Mardi Gras music, drum and bugle corps, Dixieland, and combine those sounds with a little funk.

Such was his recipe for success and the starting point for an ongoing career as a living legend.